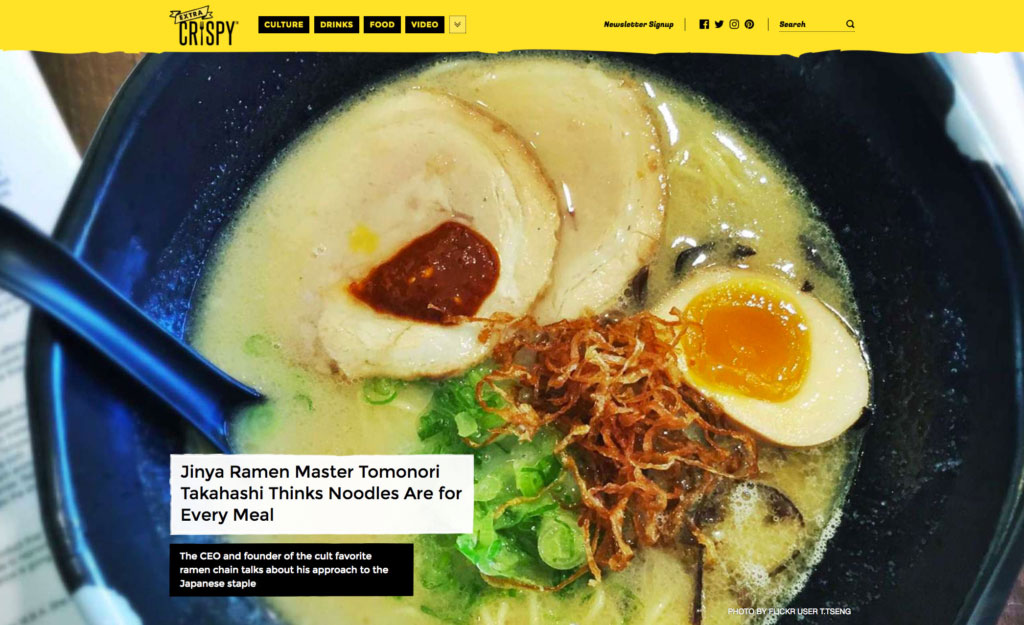 Every morning, Tomonori Takahashi eats the same breakfast, prepared by his wife: a bowl of plain yogurt with five different types of sliced fruit placed on top. And though the types of fruit might change, depending on the season, it’s “always five,” he told me through a translator.

This is exactly the kind of meticulous approach Takahashi has to his ramen as the CEO and founder of the cult favorite chain Jinya Ramen. Jinya focuses on tonkotsu-style ramen, which has a thick, almost stew-like broth, and though the chain of restaurants has become known for using somewhat unusual ingredients—like, say, lobster—the basic recipe still sticks to many of the fundamentals, including aging the handmade ramen noodles. “We didn’t change our traditional taste or anything,” explained Takahashi, “but we tried to make adjustments so that a lot of customers can enjoy the ramen.

The work and attention to detail paid off. When he opened the first Jinya Ramen Bar in Studio City, California, in 2010, Takahashi’s efforts were roundly praised. Food critic Jonathan Gold of the Los Angeles Times even called it, “the best ramen Los Angeles had ever seen.” In 2013, Jinya opened a franchise in New York City’s West Village, which was heralded as the “secret Ippudo” by Eater. But the New York location quietly shuttered in less than a year, leaving many New Yorkers to wonder whatever happened to Jinya.

The ramen business is still booming. There are now 20 Jinya Ramen Bars across North America, and Takahashi has plans to open at least ten more in 2017, including their first shop in Tulsa, Oklahoma. and though Oklahoma might not seem like the most natural place for high-end Japanese cuisine, that’s kind of the point. Over the last six years, Takahashi has made a conscious effort to move his shops away from the coastal cities of New York and Los Angeles and focus more on the middle of the country.

His strategy is working. “Right now, Houston is one of the places selling the most ramen, and they have the number one sales for Jinya,” he explained, and so Takahashi believes that there’s no reason a high-quality ramen shop can’t do well in a place as seemingly obscure as Tulsa—and no reason Jinya can’t be there first. “Everybody’s so excited, everybody’s heard about ramen,” Takahashi said. “They’ve been waiting, and we wanted to be the first one. Pioneers. So that they know that their standard’s going to be Jinya. When they think about ramen, they know Jinya.”

Takahashi’s desire to be a pioneer can be seen in his cooking, too. His most recent creation is adding Brussels sprouts to ramen, which sounds gross but somehow works. “We cut the Brussels sprouts and then we fry it, just for ten seconds,” explained Takahashi. “After, we put our original sauce, and by putting the original sauce, it suits the taste of the ramen, which is why we started putting the topping.”

Takahashi still believes in following tradition, though, and sometimes, that means taking time to make things the right way. Jinya’s tonkotsu broth, for example, is cooked for ten hours. But that same attention to flavor is given to even the most seemingly simple of ingredients: the seasoned egg that sits on top of the broth and noodles. At Jinya, the egg is marinated in a mixture of soy sauce, garlic, and other spices for three days; it’s then slowly boiled twice to ensure that the yolk stays soft. “We could make that process shortened to a day by making the sauce very strong, but it wouldn’t be the same,” explained Takahashi, but for him, the quality of the egg is a sign of a ramen shop’s commitment to doing things right. “If they care about the ramen and the quality, they would care about the egg being perfect, even though it takes such a long time.”

But the best ramen isn’t necessarily the richest or the most decadent. “In Japan, everybody eats ramen after they drink, so it’s such a great hangover cure,” Takahashi explained. “In the morning, it’s not a thick, thick tonkotsu-based ramen, but something with vegetable broth, vegetable soup ramen, with a top of cherry tomatoes or something light.” Really, there’s no good reason not to eat ramen for every meal, as long as it’s the right type of ramen, and it’s done well.