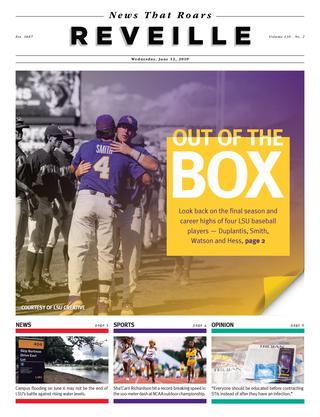 The ramen world in Baton Rouge just expanded with the opening of JINYA Ramen Bar.

JINYA opened its doors on June 17 in Perkins Rowe directly next to Cinemark, occupying the space that previously belonged to Voodoo BBQ. The restaurant is in a soft opening period before fully opening the location.

“We were looking at different concepts and we kind of just stumbled across JINYA in our travels and really fell in love with the brand,” said Avila, who obtained an accounting degree from LSU in 1997. “The product is just fantastic and the experience itself goes extremely well with the product. We were really taken.”

JINYA does not serve the college student rite-of-passage meal known as Maruchan ramen — it’s comfort Japanese cuisine in a gourmet setting. Ramen is a traditional Japanese dish, an adaptation of Chinese wheat noodles. The noodles are served in a meat or fish-based broth and topped with a variety of items from sliced pork to nori, menma, naruto, seafood, vegetables and eggs.

JINYA’s menu features 16 ramen dishes. The “Old Skool Ramen” has all the confections of traditional ramen — chicken broth, pork chashu, egg and thin noodles. For the adventurous palates, the “Tonkotsu Spicy” includes kikurage, a jelly fungus, and the “Lobster Me Happy” includes shrimp and lobster wonton. In addition to ramen, they serve “Rice Bowls & Curry” and three varieties of JINYA mini tacos.

JINYA’s broth is slowly simmered for more than 10 hours. The noodles are made fresh daily and then aged for three days to maximize flavor, crafted to sink in the bowl with thick noodles for some broths and thin noodles for others.

“It’s been very, very well received,” Avila said. “We’ve been extremely busy. We’ve got some things to iron out but we’re getting through that with our new staff. We’ll continue to get better and improve as we go but for the most part, our guests are leaving happy, and that’s the goal.”

CEO & Founder of JINYA Holdings Inc. Tomonori Takahashi opened his first JINYA restaurant in Tokyo in 2000, following in his father’s footsteps as a restauranteur. Realizing the lack of genuine ramen in the U.S., Takahashi opened the first JINYA Ramen Bar in Studio City, California, in 2010. The name JINYA was inspired by a Samurai soldier who was close to the Tokyo community at the time.

“Whenever you come through and you’re going to be seated, our hostess yells ‘irasshai’ and then the whole restaurant calls it back to you,” Avila said. “It means ‘welcome.’”