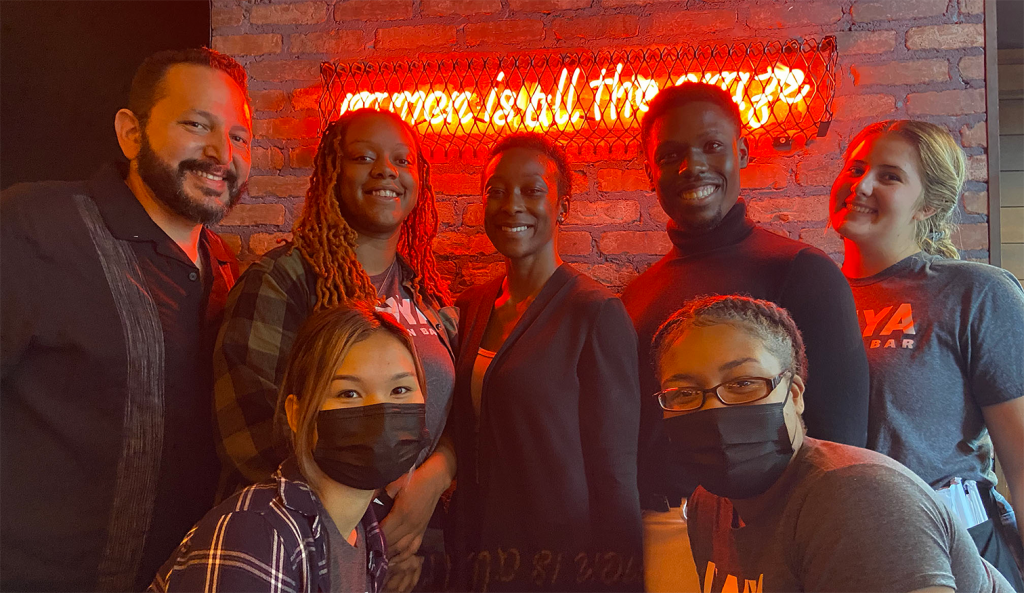 Standing on the corner of South Tryon and Hill Street is the newest monument in Black ownership in the form of JINYA Ramen Bar. As one of 40 specially selected franchisees, Jahzmin French—an 18-year service industry vet hailing originally from Pensacola, Florida—along with her incredible team have brought North Carolina it’s first iteration of the hottest, most exclusive ramen restaurant in the country. No stranger to the struggles found growing up in a single-parent home, Jahzmin has quite literally started from ground zero.

Outside JINYA Ramen Bar, Downtown Charlotte. (photo courtesy of charlotte.axios.com)
“Me and my brother joke all the time now, like ‘Wow!’ we didn’t know how poor we were growing up,” Jahzmin told THE BLOCK on a bustling Thursday afternoon in downtown Charlotte.

Balanced by her mother’s lessons in hard work and her Christian faith, the restaurant industry maven and author has transitioned from a high school Steak and Shake employee to a 10-year career at Hooters, culminating with her resignation as the brand’s first Black woman general manager. That landed her in West Palm Beach at Hurricane Grill as their first Black woman GM and eventually the opening of her own restaurant consulting business back home in Pensacola.

“PEOPLE DON’T KNOW HOW MUCH I’VE PRAYED, CRIED, CALLED OUT, WAILED FOR THIS; AND SOME DAYS ARE REALLY HARD, BUT GOD IS MY #1 SOURCE. I HAVE TO KEEP MYSELF FILLED UP BECAUSE YOU CAN’T POUR FROM AN EMPTY CUP.”

JAHZMIN FRENCH
“I took the big leap, so to speak, moving back to Pensacola, and I just did my consulting business full time. Mainly because in West Palm, I learned how many people needed help with their restaurant. They didn’t know how to operate them. They didn’t know inventory, cost of sales, how employees could be stealing from them,” Jahzmin divulged.

With no shortage of restaurants in Pensacola and West Palm Beach, Jahzmin quickly found her niche and immediately excelled in it. Think Gordon Ramsay, but a Black woman and way nicer.

“It’s actually hard for me to watch [Ramsay] because of his delivery [laughs], but everything he says is absolutely true. When you’re thinking about food safety, flavor and presentation you sometimes need somebody that’s going to tell it like it is,” Jahzmin said.

Unlike their counterparts, Black women in most professions constantly have to prove their worth only to leave behind shoes that aren’t easily filled. Meanwhile, mediocre approaches from the other side benefit merely by association. In her rise to the top, Jahzmin hasn’t been immune to that experience, but she has managed to navigate those spaces with a deft personality and sheer determination.

Jahzmin French, Owner/Operator of JINYA Ramen Bar Charlotte. (photo courtesy of Sarafina Wright of qcmetro.com)
“You just have to learn how to read people, in a sense. I’ve learned to kind of feel out personalities quickly. I think we all have the ability to ‘feel vibes’. So, you just let them know that you’re not there to tread on their territory or take over their operation but to make their lives easier. Help them work smart, not hard,” Jahzmin continued,

“I got a lot of not so inviting personalities from some of the chefs in some of the restaurants. Chefs own their domain; they don’t want some random restaurant consultant coming in telling them how to really do things or in a sense, check up on them. So, I definitely had many accounts like ‘We don’t need her!’ or ‘Who does she think she is?’ and then it became ‘Thank you for coming!’ or ‘I learned something new, I’ve been in the industry over 30 years, and I can’t believe I learned something from you … can you stay longer?’”

“[JINYA] IS REALLY A HOT BRAND. I MEAN, THE FOOD IS FANTASTIC. WE DON’T COMPROMISE THE QUALITY AND THAT’S WHAT PEOPLE WANT. THE VIBE IS GREAT, THE ATMOSPHERE IS FUN, LAID BACK, ROMANTIC, WHATEVER! IT CAN FEEL LIKE ALL OF THAT.”

JAHZMIN FRENCH
Jahzmin has masterfully flipped all of that knowledge and stellar track record directly into her brand new restaurant in the heart of the city.

“Honestly, nobody could’ve told me that I would be here with a JINYA in Charlotte. I didn’t even know what a JINYA was to be completely honest and transparent! [laughs]. But my partner and I, we had three restaurants in Louisiana and our third restaurant we bought was from a guy that owned a JINYA. So we were like ‘What is that?’” Jahzmin relayed.

An elegant ramen bowl as presented at JINYA Ramen Bar. (photo courtesy of jinyaramenbar.com)
That curiosity led to the exploration of a few hot, upcoming franchises—one being Salata, which just so happens to be JINYA’s next door neighbor.

“We were between a few different brands [before choosing JINYA], and Salata was one of them! So when we were in buildout and this was just dirt, they were like ‘Yeah Salata is going right there’ and we were like ‘Holy crap, we were just speaking with their brand about to fly out to Houston for their discovery day!’” an amused Jahzmin told THE BLOCK.

“The founder looked me in the eyes and asked me, ‘Why do you want to do JINYA?’ And I told him that I’d been to numerous JINYAs and several other ramen restaurants to purposely to try to find a better ramen, but I could not.”

“I WANTED A SEAT AT THE TABLE OF SOMETHING THIS GREAT, AND ALL I NEEDED WAS AN OPPORTUNITY.”

JAHZMIN FRENCH
At the end of the day, JINYA just fit with what Jahzmin wanted to do next in the food world. The brand’s founder Tomonori Takahashi put on his best Solange playlist, offered Jahzimin a seat at the table and presented her with the chance to further the growth of the brand in new cities.

Her passion for food service, stellar track record and genuine spirit has catapulted her to heights previously unseen, but not at all unexpected because it’s only part of a master plan.

“I do plan on having an independent brand. You know, I can’t elaborate on it just yet, but I’ve already had those conversations and it will be something that I launch in Pensacola as of right now. But at the same time, Charlotte is not off limits and neither is anywhere else!” Jahzmin cryptically revealed.

So, if you’re ever in the mood for authentic ramen dishes or simply want to try something new, then you’re going to want to add JINYA to your list. From the fresh, handmade menu to the sleek interior, full bar and banging playlist—it’s definitely a favorite of THE BLOCK and is sure to become one of yours as well.

For more information or to place an order, visit jinyaramenbar.com Connect with Jahzmin on LinkedIn.